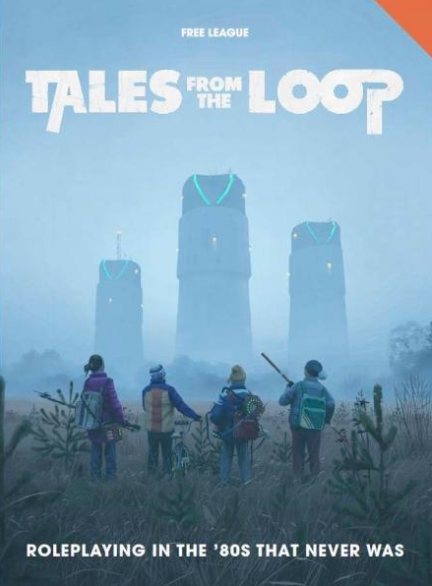 Perhaps the best thing about the one-shot of Tales from the Loop me and my players recently ran through was we never mentioned Stranger Things once.

Perhaps it was down to a couple of us remembering the actual decade the game was set in, or perhaps it was Simon Stålenhag’s evocative 80s-that-never-was weird science setting. But instead of talk of Eleven and the Upside Down, we were all air punches, I’ll-be-back’s and flocks of seagulls.

Tales from the Loop is perfect for a one-shot. Character creation and rules explanation were over in less than 45 minutes, with the players itching to step into the kid-sized shoes of their new personas: an embryonic ‘gang’ that was well-balanced thanks to the collaborative creation process. So we had the Popular Kid to turn on the charm, the Jock to rush into trouble without a second (or indeed a first) thought, the Hick to tinker with any machines that the group might come across, and the Computer Geek to provide the brains of the outfit. In their secret lakeside shack hideout, they were raring to go and out-goonie The Goonies.

And what a blast we had. There’s something gleefully enjoyable about watching grown adults slip back into childhood behaviour, the same thing that makes Tales from the Loop such a change from the far more serious and at times stuffy RPGs where everyone is a mighty dragon-bothering ‘hero’. Here instead, the kids are vulnerable and often weak, prone to getting scared, exhausting themselves or bursting into tears if things don’t go their way.

The d6 system is fast and fluid and easy for everyone to understand. It’s a skill check-based game, without the concept of rounds, initiative or even combat as such. Every roll is important and carries weight, meaning that handfuls of d6’s were soon eagerly scooped from the table at even the merest mention of the possibility of ‘Trouble’, with all eyes fixed on the results.

When I first read the rulebook, I had a fear that things were going to be too easy: that the chance of rolling at least one six on a pool of seven or eight dice was so high that most of the skill checks would be successful. However, in reality, this proved far from the case. There were at least two examples where a character had five points in an attribute, two points in a skill, and help from another kid, meaning they had a pool of eight dice … and then failed to roll a single success. And then spent a luck point to roll them all again, and still failed …

I should have trusted the gods of chance after all. The probabilities of success were a lot lower than I’d anticipated, and this made the gameplay a lot tenser than I’d expected it to be.

This was none more true than in the mystery’s final showdown, where some successful sneaking had resulted in the group of kids needing to cumulatively hit eight successes in four separate rolls.

Had they failed their stealth checks they’d have been facing a far more daunting twelve successes instead. Achieving eight was far less daunting, but still deliciously tense. With use of luck and pushed rolls, the kids’ victory was touch-and-go right up to the last minute, making for a hugely exciting and nailbiting finale that truly felt like the climax of  the best 80s kid-flick ever.

The biggest compliment I can pay Tales from the Loop is that I want to play it again right now. I want to see the relationships between the kids develop, to see them play out scenes from everyday life, to have them feel pumped up by listening their favourite songs. I want to run them through a series of ever-more bizarre weird science shenanigans, then run them to the poignant point where one or more of them turns 16, and loses the sense of magical wonder and drive to solve mysteries forever.

Until, at least, they return in the 90s for the game’s companion / sequel, Tales from the Flood…