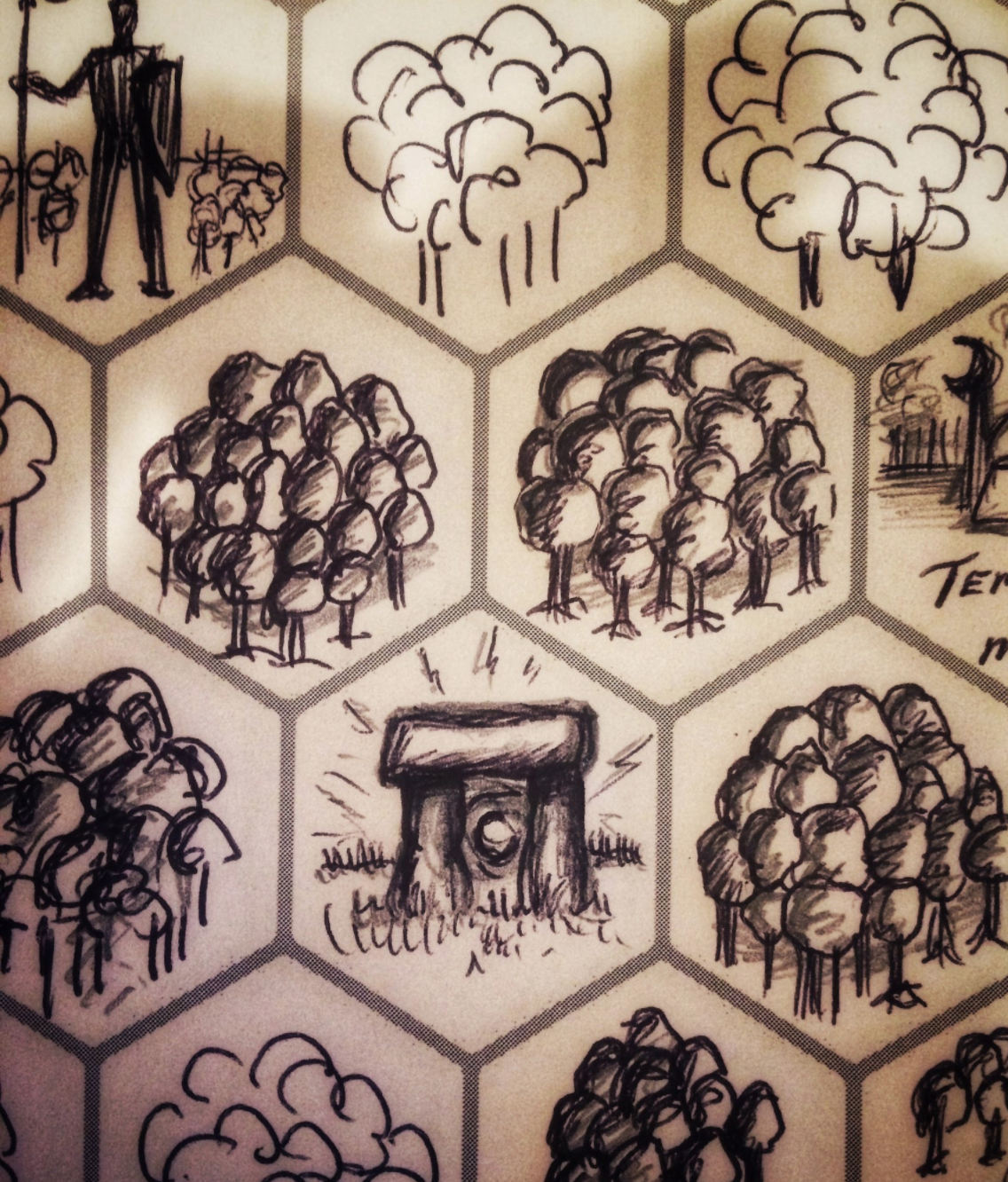 I had another opportunity to playtest some of the material from Queens of the Feywild last week.

As I’ve mentioned previously, part of my inspiration for the adventure path is the Old School Revival (OSR) aspect of Tomb of Annihilation, where a sizable chunk of the campaign sees adventurers filling in the blank hexes of an initially empty map.

I definitely want to do similar with the Feywild, but with some few idiosyncracies of its own. Fey-specific rules for what might happen during a long rest, tables determining how … refreshing … the foraged food and drink can be, randomly-generated monster mashups (hello, gelatinous goblins), and more.

So I bought blank hex paper, and had a play around. Filling in many of the spaces with forest (hey, it’s the Feywild…), I placed a few other points of interest and some geographical features that players could use as landmarks should they get lost. I homebrewed up a couple of small dungeons, and created a random encounter table filled with bizarre and wondrous things befitting of the Feywild.

Then I gave my players a blank sheet of hex paper, plonked them in the middle of it, and asked them which direction they wanted to go.

It was fascinating, and hugely enjoyable. And it took me right back to those pen & paper days of my youth, rolling for wandering monsters and yomping through a barely-sketched fantasy landscape in search of adventure. This time though it was different.

There was still a plot in there (though we mostly skirted over it, given the fact we only had a single session available). This gave a sense of cohesion and purpose to the hexcrawling, something that was often lacking from those early-day treks.

Also, the mechanics of 5e are well-honed for this style of open-world play, with fluid rules for navigation and wilderness survival, as well as guidelines about how often to roll for random encounters. Thus the unpredictable nature of what the party discovered (and what discovered them) made for some solid emergent narrative, where the only scripted part of what happened was when they stumbled across The Temple of the Moon, one of the two dungeons I’d prepped for the session.

That too wore the OSR heart I’d given it very much on its sleeve. A bit of a puzzle dungeon, it had traps, doors which required artefacts to open, and even a microcosm of the surface of the moon inside. My players seemed to enjoy this style of adventuring, which taxed their little grey cells as much as it did their little plastic dice.

The session ended with them escaping the dungeon after having fled from the insane Archfey that materialised there, just like an OSR boss monster should.

And it ended successfully, if the players’ reaction was anything to go by. They all said they felt like they wanted to continue, and they’d appreciated the change of pace and the sense of the unknown that they’d got from both the hexcrawl and the dungeon.

Whilst I think a whole campaign like this would eventually become a bit of a slog, I’m now convinced this OSR style of play is a great way of adding depth and layers to the overall experience.

So I’m sold. Queens of the Feywild will still be an epic and complex sandbox adventure path for characters of levels 1-20, but a fair few of those levels are likely now to be gained hexcrawling through the wilderness …