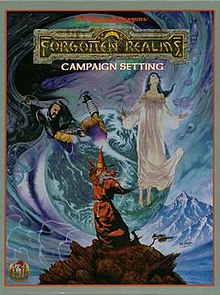 I have, as previously mentioned, taken up the gauntlet of writing my own campaign in the Forgotten Realms, D&D’s venerable high fantasy setting which was first imagined existence decades ago.

Since first being born as an ‘official setting’ by Ed Greenwood in 1987, he and countless dozens of authors have expanded the world and fleshed it out with a mind-blowing amount of detail. Reading over the various sourcebooks and old Dragon magazine articles, it at times feels like every stone and blade of grass in Faerûn has been described, complete with a back-story, genealogy and statistics. But attempting to set a campaign-length adventure within its borders can be a bit of double-edged sword…

On one hand, a huge body of reference work is available to study and take inspiration from. Most settlements, towns and cities have been detailed extensively: from the lesser known hamlets of the Greenfields to the more famous metropolises of Baldur’s Gate and Waterdeep. Personalities, organisations, adversaries and gods have all had thousands of words written about them over the decades, and the world of Faerûn has itself evolved with each edition of Dungeons & Dragons, with the ‘canon’ making far-reaching changes to the setting and its inhabitants. In short, there is the polar opposite of a shortage of material to draw on…

On the other hand, the pressure to ‘get things right’ is also a bit overwhelming. D&D has an understandably huge and rabid fan-base, and writing additional lore about such a well-loved realm as Faerûn comes with a certain amount of responsibility. Of course, I’m my own worst enemy in this regard, as this wouldn’t matter a jot if all I planned on doing with the campaign I’m writing is running it for one of my regular gaming groups. But as I aim to publish it on the DM’s Guild in due course, I have set myself a high bar in terms of accuracy and consistency.

But that’s my choice, and therefore I’m not complaining. To be honest, I’m actually quite enjoying myself.

For example, in researching the city of Silverymoon, I have read magazine articles about it, studied the entries in The Sword Coast Adventurer’s Guide, read a few pages in The Forgotten Realms second edition sourcebook, and drawn deeply from the relevant entry in The Silver Marches third edition gazetteer. I’ve read the lore on Lady Alustriel Silverhand, discovered the fate of the Luruar Confederation, understood the layouts of the learning halls and libraries of the city’s Conclave, and done my best to make sure everything I’m creating out of this mass of facts and figures is correct as of the ‘current’ year of the Forgotten Realms.

By doing that, I have almost started to think of Silverymoon as a real place. I can picture it in my mind’s eye: the gleaming spires, the towering treetops, the shimmering Moonbridge across the Rauvin river. I can imagine how High Mage Taern Hornblade sounds when he speaks to the city’s leader Methrammar Aerasumé. I can conjure up images of the Lady College, The Vault of Sages and the raucous Son Of The Goat tavern.

Hopefully by doing so, I can ensure that everything I write about — and ultimately bring to life — in Silverymoon is full of atmosphere, flavour, intrigue and adventure.

And if I succeed, it’s thanks to Ed Greenwood and the host of others who have helped turn the Forgotten Realms into probably the most fantastic and at times maddeningly detailed fantasy world ever.