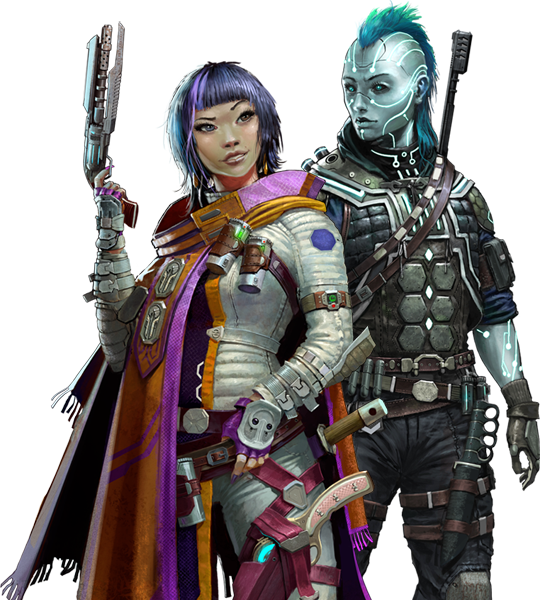 Starfinder is a great game.

Starfinder is also a terrifying game.

How can any game with a 523-page rulebook not be?

I knew what I was getting myself into. Evolved from D&D 3.5, and thence from Pathfinder, Starfinder is the crunchiest game I’ve played in a long, long time. With rules for this, exceptions for that, tables for this, that and the other: attempting to run a session that doesn’t grind to a halt every few minutes whilst everyone consults the rulebook is a daunting task.

Of course, I’ve only played about half an hour of it so far. The first 3.5 hours of our session zero was taken up with character creation (and that was skipping some parts of it, like choosing feats and picking some class-specific abilities). This is not a light game by any means, and the possibility to disappear down a min-max rabbit hole is great. Fortunately, I’d handpicked a group of players who value role-playing over powergaming, so we all quickly agreed to handwave over some of the more intricate details and get on with the show.

This certainly proved to be the right decision, aided no end by my players’ creativity and skill. Though I was running the first few pages of the only as-yet published adventure path Dead Suns, the most enjoyable part of the whole session was an unscripted twenty-minute episode that consisted of nothing more than the players introducing themselves to each other.

Thus the pompous space elf (sorry, lashunta) lore mystic made the acquaintance of the emotionally-retarded android sharpshooter, whilst the sassy cigar-chomping rodent mechanic leaned back in her seat and listened. All the while observed with a degree of scorn by the feisty teenage human technomancer, who just wanted to get home and read a good book.

This — and not discussions about what difficulty check applied to a wisdom-based saving throw against surprise attacks — was exactly what I’d been hoping for from the game. Most of what attracted me to Starfinder had been the setting and the playable races, and it was a complete joy to see the players leap into that milieu so quickly and adeptly.

And the crunchy bits ended up being a nice surprise too. We were all D&D 5e vets, so the concepts of actions and movement and tactical combat weren’t new to us. The first combat was actually pretty good fun, with needle pistols, energy blasts and trusty old magic missiles coming out and dealing technomagic death in no time. Skill rolls felt natural, and we only had to pause a handful of times to check ranges, effects and abilities, resulting in a system that complemented what we were all trying to achieve rather than slow it down.

Sure, we were effectively playing Starfinder Lite (we improvised the precise effects of some spells and the mechanic hadn’t built her combat drone yet), but it showed a huge amount of promise, both setting-wise and from a crunchy rules perspective.

So much so that we all — probably to our own surprise — agreed to do homework before next time. The technomancer and mystic will select their spells, the mechanic will craft her drone, the soldier will hone his skills and abilities. Everyone will pick feats, weapons, armour and equipment. I’ll study the intricacies of their classes and support them through their first full-on multi-action encounters.

In short, I’m pretty certain that with Starfinder, we’re all going to have an absolute blast.