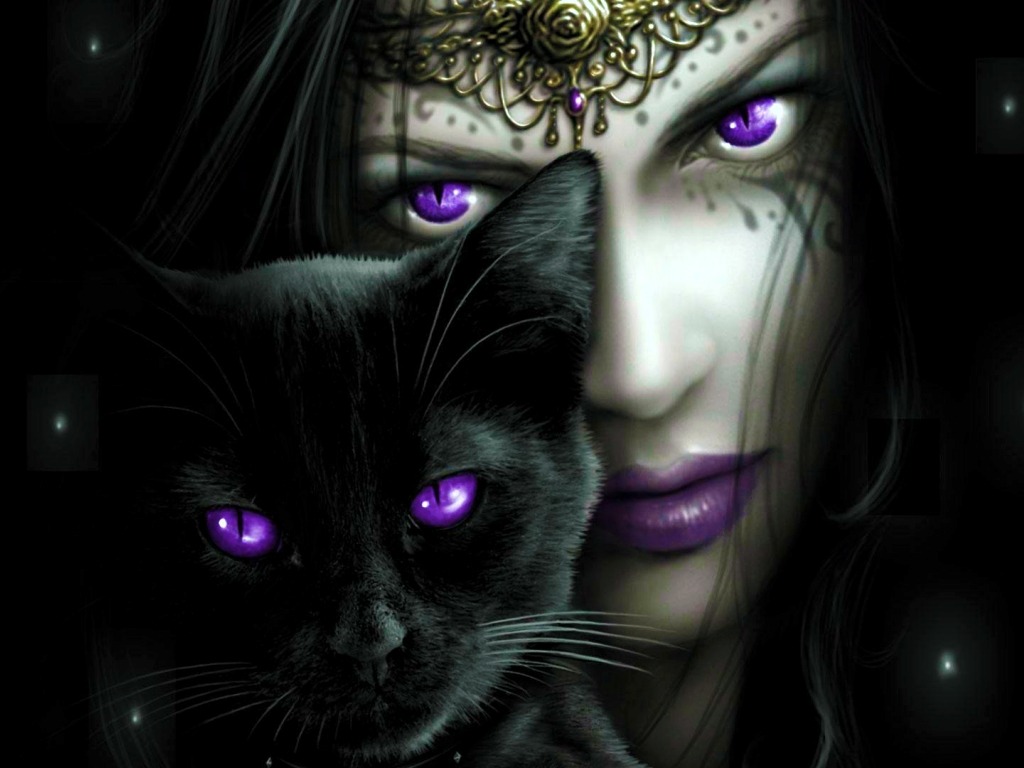 A Dungeons & Dragons 5e NPC that can be dropped into any adventure or campaign.

A slender young woman with short black hair and striking blue eyes approaches. Her face is wet with tears and she crouches as she walks, as if expecting an attack at any moment. A pair of cats — one black, one white — purr and twine between her legs. “Help me, please! My baby has been taken from me,” she says between gasping sobs.

Lady Felandra stands a little under six feet tall and wears unremarkable commoner’s clothing. Her skin is smooth and pale, her black hair is long and straight. She wears a jewelled circlet around her forehead and appears to be only around 17 years old. She looks human, with the exception of her eyes which are slitted like those of a cat, something which is only immediately apparent if she is in bright light (such as in direct sunlight or if the light from a torch or spell is shone into her face).

Her two cats look at her adoringly and never stray far from her side.

Lady Felandra is a nobleborn Eladrin who angered the Unseelie Fey. When she failed to bow before Old Mag, a night hag with delusions of grandeur, the angered old woman transformed Felandra into a mortal woman, turned her three children into cats, and sent her through a shimmering Fey portal that led to the mortal plane. Worse of all, Old Mag snatched Felandra’s youngest daughter Gretchen, and is holding her prisoner in her lair, where she plans to cook and eat the child on the night of the next full moon.

Felandra will do anything to save her daughter. She knows she is too weak to face Old Mag on her own, and is searching this strange land she has found herself in for someone to help. Her circlet contains an enchantment that will allow her and any willing creature within 30 feet of her to travel to and from the Feywild, something she will only activate if she is sure those she has found to help her are trustworthy.

The two cats at her feet are her sons Connor and Bran, who are fiercely protective of their mother, hissing and spitting at anyone who displays animosity towards her.

Felandra has the stats of a noble, although she has no weapon or armour. When allied with player characters, her two sons act as distractions during combat, providing the equivalent of the Help action to one friendly character once per turn, giving them advantage on their next attack if it is made before the end of that turn.

Felandra is grief-stricken and desperate. She will do everything in her power to get a group of adventurers to help her, using her charisma and charm on any who show her kindness, or emphasising her vulnerability and helplessness.

She will urge the characters accompany her to the Feywild as soon as possible, but is prepared to join them on the material plane for a short while if they have matters that need attending to. If the characters do not travel to the Feywild with her after two days have passed, she will express sorrow and disappointment then depart.

If any creature acts violently towards her or her cats, she vanishes in a shimmering blue light, returning to the Feywild without a trace.

Felandra tells the truth – she joins the party and transports them to the Feywild, where they embark on a short quest to defeat Old Mag and rescue Gretchen.

Felandra is lying – the whole story is a lie: Lady Felandra is a night hag in disguise, and the cats are her two sisters. If she persuades the characters to return with her to the Feywild, the hags take their true form and attack, with all the benefits of being together as a hag coven.

Felandra is deceived – most of the story is correct, but the two cats are — unbeknownst to Felandra — not her children but two evil sprites in disguise. Old Mag has in fact captured all three of Felandra’s children, and has tasked the sprites with keeping Felandra away from her lair. In the Feywild, the sprites will find it hard to maintain their pretence and will be tempted to turn on both Felandra and the player characters …