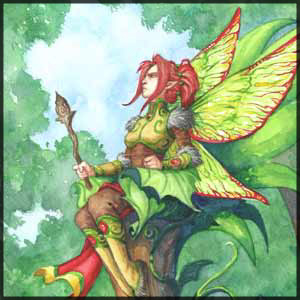 I have committed myself.

Queens of the Feywild is a thing. An epic-level campaign for 4-6 characters of levels 1-15.

I’ve told a couple of people about it; I’ve even checked with the advisers of the Dungeon Master’s Guild to check if anything I’m planning infringes copyright and would preclude me from publishing it online. It doesn’t (yay Open Game License and Wizards of the Coast).

So I have set my sights high. Inspired by the likes of Storm King’s Thunder and Curse of Strahd, Queens of the Feywild aims to do the same for that mystical dimension as those books did for the Savage North and Barovia.

I envisage a solid few months spent researching, plotting, writing, playtesting, designing, formatting and tearing my dwindling supplies of hair out. I envisage having an absolute blast, in other words.

Getting the facts straight

For now, I am firmly in research mode. Although there is relatively little about the Feywild in current 5e material, there is a wealth of information scattered throughout D&D’s history. So I’ve purchased 4e’s excellent Manual of the Planes and Heroes of the Feywild, both of which sketch in the locales, races, personalities and challenges of the parallel world. Following the Dungeon Master’s Guild advice, I’m doing the same with the absolute mountain of material available on the Forgotten Realms, making sure — for copyright reasons — that my version of the Feywild is very closely linked to the places, people and events unfolding in Faerun.

I’m scouring past issues of Dragon magazine for articles about the Fey and have uncovered a trove of information there: everything from plot seeds hidden within character subclass descriptions, to ancient fey artefacts hidden in forgotten temples, any of which has the potential to become my campaign’s main McGuffin.

It is — without exception — inspiring stuff. My goal with Queens of the Feywild is to have it be a sandbox in the same vein as Storm King: where there are quests, side-quests, player-determined order of events and a whole cast of interconnected NPCs and factions with their own agendas and motivations.

And if I’m creating the sandbox, then the stuff I’ve found from past editions is very much the material I need to build it. The plot and timeline of events will be my own creation, but the confines of the world itself will be drawn from the source material of the past that I’m discovering, tweaked to fit things as appropriate.

When I started this task, one of the things I’d hoped to find was a detailed Feywild sourcebook. It didn’t exist.

So one of my goals is to have a large amount of my campaign be equivalent to that.

Wouldn’t that be nice?