When I embarked upon my journey of rediscovering D&D, I believed my time was too precious to spend doing anything more than running pre-published campaigns and adventures. Worldbuilding, encounter crafting and adventure devising — though undeniably alluring — were too much effort, especially for a man of my advancing years…

A full-time job, a fiction-writing hobby, personal and family commitments… how dare I even entertain the notion of creating a sandbox campaign for characters of levels 1-15 …

How dare I indeed.

It’s been almost three months since I first purchased my fourth copy of the Player’s Handbook. And, almost without exception, those three months have been great. Reading the rules and prepping Tyranny of Dragons has taken a lot of my previously-believed-too-precious time and — rather than see other things sacrificed on a draconic altar — has had the opposite effect.

The drudgeries of the dayjob have become more bearable. My fiction has taken an inspired, fantastical turn. My imagination has had a boost the like of which it’s not received in years, which has filtered over into all other aspects of my life.

Queens Of The Feywild 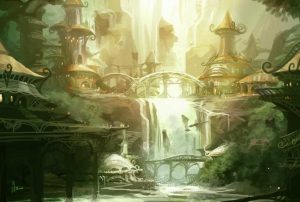 A place of wonder and enchanted beauty. A place where glittering palaces rise as tall as mountains, where dryads and satyrs dance in moonlit forest glades, where rivers of milk run through endless meadows, where lakes of molten gold dazzle in the rays of the setting sun.

A place that, for those who know where to look, is closer than many realise. Step between two ancient standing stones in the light of a harvest moon, whistle a tune at a lonely crossroads at midnight, make an offering to the tree spirits of the Misty Forest and who knows…? Perhaps a shimmering portal to the Feywild will appear.

Ruled over by the mysterious Archfey, the Courts of the Feywild are impenetrable to most mortals. Subtle intrigues, beguiling diplomacies and eldritch politics hold sway in the lands of the Fey as the influences of the Courts of Summer and Winter ebb and flow like the tide. Unconcerned by what they view as the meaningless struggles of the mortal realm, the Archfey take seeming delight in their endless dance of intrigue, shaping not only the balance of power but the lands and creatures around them.

Yet of late, those few mortals who have visited the realm and returned to tell the tale come bearing troubling news.

The Feywild is at war.

The Courts, once content to spar with nothing but words and intentions, now seem locked in a titanic struggle for dominance. The fair Queen Titania sends legions of centaurs and dryads to the field of battle, there to face the dread unseelie forces of the Queen of Air & Darkness. Archfey once neutral now pledge allegiance to one side or the other, be that the fearsome Bear King and his army of werebears, or the arcane Queen of the Witches, mistress of all the elements. Even the Lord of the Wild Hunt has been rumoured to have joined forces with one faction, threatening any unable to run from his terrible steed. Only a few, such as the River King, the Lady of Frost and the Unicorn Queen have yet to pick a side.

And all the while, in the shadowed depths of the Feydark, rumours surface of the awakening of the giant Fomorians, watching with malicious intent to claim the spoils from this unprecedented war.

Normally, the ever-shifting balance of power in the Feywild has little impact on the mortal realm. But on hearing the tales, Lady Alustrien Silverhand and the Spellguard of Silverymoon grow troubled.

Not only for the fate of the Feywild, but — if the words of an ancient prophecy are to be believed — for the very future of Faerun itself.