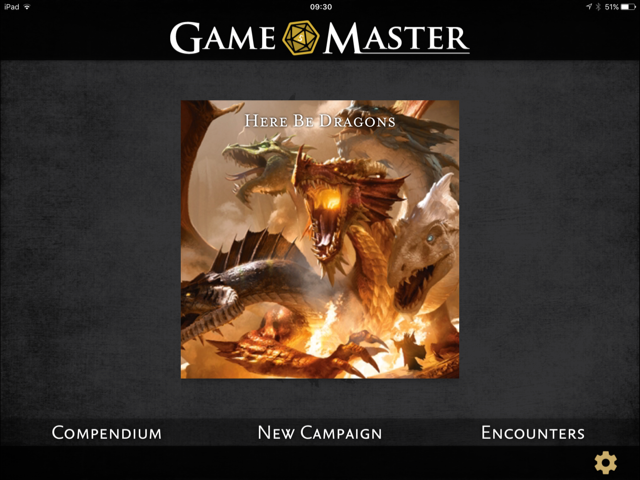 Back in the day (“enough already”, everyone, ever…), my side of the table looked like a post-it note factory after a tornado had hit.

Fast forward a few decades and the need for post-its has vanished. Instead, everything I used to hurriedly scribble is now able to be captured, tracked and updated in one place – Game Master 5th Edition from d20 Fight Club.

The thing’s a revelation. Making use of the open source D&D rules kindly made available to developers by Wizards of the Coast, Game Master is an iPad app that takes the bookkeeping out of being a DM (and if you took one glance at my accounts, you would realise why I find this so, so beneficial).

There are three features of the app I’m finding invaluable, all of which are allowing me to keep the game flowing in a way I’ve never been able to do before. No more thumbing through the PHB, no more interrupting the flow to ask what a player’s damage bonus with a two-handed quarterstaff is, no more invincible goblins due to me writing down the wrong number for their AC.

This is awesome. Punching in the character stats, feats, abilities and spells creates an easy-to-read and accessible character sheet for each player, giving me one-touch access to all the info I need.

Everything from each character’s passive perception score to how long the Bane spell lasts – all there.

This allows me to minimise breaking out of the game to ask players their armour classes and the like; it also gives me the ability to resolve queries the players may have about their own characters, quickly and with the minimum of fuss. Yes, it takes a little bit of effort to set up (and then change as the characters level up), but is proving so worth it.

This is even more awesome. Encounters can be set up very quickly, before the session or on the fly. Characters are already imported into a new encounter: a bestiary contains details of most foes, which can be quickly added in, complete with stats, HP and special abilities.

When the encounter’s ready to start, I punch in the initiative scores the characters have rolled, and the app automatically generates the others. This creates the turn order, and shows it visually, letting me easily track whose turn it is.

Damage is easily attributed by tapping on a character or creature’s hit points and updating them; conditions can be added, with the app even tracking how many seconds (of game time) a condition has been in effect. Characters who’ve dropped to zero HP are automatically skipped when the ‘next’ button is clicked … in short, this makes running combats faster, smoother and more fluid than I’ve ever experienced.

Here Be Dragons is a huge, sprawling beast. Keeping track of notes, NPCs, magic items and the like will prove crucial. The app allows for this, though I’m not yet convinced it’s the best tool for that particular job, as all it appears to offer is a glorified notepad section with no logic or tracking incorporated. I shall continue to research other options here, or maybe (*whisper*) even resort to post-it notes…(though more likely a digital equivalent like Scrivener or Evernote).

It does allow me to link encounters together into adventures/chapters though, and that is proving useful to keep things organised and without revealing too much at a time (especially handy when sneaky lightfoot halflings manage to catch a glimpse of the screen…)

The app is only able to use the open source rules and bestiary, for obvious legal reasons. This means that sometimes, monsters and spells are not listed in their respective sections. Fortunately, it’s easy enough to add in monsters and spells using templates, which are then added to their respective sections and are able to be used in any encounter, so plugging the gaps is not a huge deal.

In summary, though, this is the kind of thing my younger DM self dreamed of, but would have thought impossible without some kind of advanced conjuration or divination spell.

Fortunately, the iPad is proving to be at least a 20th-level wizard…