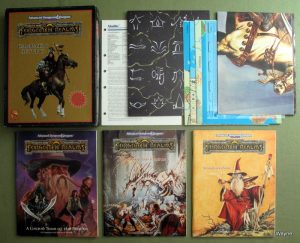 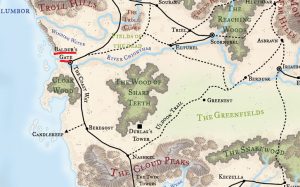 They claim it is too generic; too high fantasy and too full of tropes and cliches; not enough to give it a distinct voice and flavour; too much like Lord Of The Rings, or any of the other fantasy realms Tolkein also inspired.

I am not one of those people.

I love The Forgotten Realms.

Back In The Day™, I recall buying sourcebooks and boxed sets stuffed with background info and hex-based maps, covering the Sword Coast, Cormyr, the Dalelands and even more far-flung and exotic places like the jungles of Chult or the blasted plateau of Thay.

I devoured it all: the pantheons, the city states, the rulers, the factions. The exploits of the larger-than-life Elminster, Volo and Drizzt. The lore and prehistory that Ed Greenwood and others created, with an obvious love and passion for the genre.

I appreciated how fully-formed it all was, yet at the same time how completely open the lands of Toril were. And the encouragement from its creators to mix it up; to change things you didn’t like, to make the land, quite literally, your own.

And that’s where the Forgotten Realms shines. Don’t like gnomes? Rule it such that in your version of Faerun, they don’t exist. Worried that powerful mages like Elminster make the fumbling magical endeavours of anyone else irrelevant? Turn him into a myth, an exaggeration of a character who may or may not have actually existed. Pitch Amn against Thay in a hundred year war; turn the masked Lords of Waterdeep against each other; have a benign tribe of kobolds set up a settlement in the ruins of Neverwinter and establish a rather bizarre pleasure city of dubious morals … whatever.

So yes, it’s high fantasy. Well, hello – so’s the game you’re playing; the clue’s kind of in the name. Treat the Forgotten Realms as a template, a recipe for a world which you season to taste. Or spend months coming up with your own pantheon of gods, planes of existence, factions, intrigue, politics and history. That’s fine: it just means you’ve got a lot more spare time than I do…

For me, returning to Faerun after all this time is like revisiting a real location I haven’t set foot in for years. I’m loving brushing up on the lore, reading about events which have happened since last I stepped through the planar portal to Toril. I’m soaking it all up again, and feeling that same sense of wonder and opportunity.

Comfortingly familiar, yet with differences of 5e’s and my own making, the Forgotten Realms kind of feels like home…