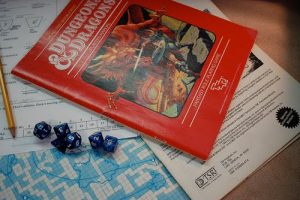 D&D is the reason I’m still able to do relatively complex sums in my head.

Back in the day (which, after just one play session, is already in danger of becoming my catchphrase), I loved all the things about D&D that are still present: the high fantasy drama & derring-do, the clatter of the dice, and the thrill of seeing those lowly 1st level characters slowly transform from fumbling minnows into apocalypse-diverting leviathans.

One thing I didn’t love was the rules. Specifically, the combat rules. With those THACOs and weapon speeds; surprise segments and rates of fire; all the subtract this, add that, multiply the result by the number you first thought ofs … I suspect the ability to fully understand the original AD&D combat rules used to be an entrance qualification for NASA.

Thank the entire pantheon of the Realms then for 5e.

Roll a 20-sided die. Add a number to the result. Compare that to another number.

By streamlining the rules, Wizards of the Coast have done something truly magical — return a game that was in danger of getting bloated and cumbersome to its fun, fluid and escapist roots, letting the players control the game, not the other way round.

Sure, the DMG still has more tables in it than IKEA, but a lot of them are optional — and they’re either there to add flavour and fun, or to make the DM’s life easier.

And yes, the first session still involved a lot of looking up the rulebooks (curse you, passive perception…), but after a while things started getting a lot smoother.

So I’m pretty confident now that after a few more sessions, the books will only be getting pulled out to look at the pretty pictures of manticores and stuff.