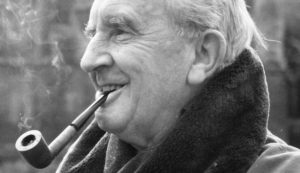 D&D jabs its finger straight into the creative part of my brain.

In a good way.

In fact, it splits that part neatly in two pieces. The first, the one with which I’m more familiar, is the same spongy mass of synapses that compels me to write fiction. As it has always been drawn to the fantastical, D&D speaks to this part in soothing Tolkienesque tones, reassuring it that it’s perfectly alright for it to yearn for a mystical non-existent land peopled by elves, monsters and magic.

The other half of brain matter is equally well-treated by the venerable RPG. It’s the part of me that finds itself drawn to the oral storytelling tradition, the moonlit tales around the campfires of folklore. It’s the bit of my psyche that enjoys using spoken word to add colour to a world, to populate it with characters both mysterious and menacing: to quite literally breathe it into life.

If I was one of an infinite number of monkeys with an infinite amount of time, the first half of my dissected brain would love nothing more than to create my own campaign, to build the world, flesh it out in exquisite detail, then thread it through with memorable, evocative and exciting encounters.

Sadly, whilst the jury may still be out on my simian characteristics, I most certainly do not have an infinite amount of time. Hence I am so grateful to the writers of Tyranny Of Dragons and the creators of the Forgotten Realms, relieving me from the duty of creating something out of nothing. I’m thankful too for the (intentionally) left blank areas in both the campaign books and in Faerun itself, as this is allowing me to sketch in my own details: encounters that aren’t in the books, details of NPCs that aren’t specified elsewhere, character bonds that I can weave into the narrative flow and use to make the adventure path unique. I imagine it’s kind of like writing fan-fic, or producing novellas or short stories set in someone else’s world. However I imagine it, it is however firing up that part of my brain in a most enjoyable fashion, and I am deeply grateful for its prodding.

Then of course there’s writing up the play sessions and creating the background lore and info based on the events that happen in-game, which is more like a collaboration with my great and creatively-talented group of players. In short, D&D gives a great big fat +3 to my fiction writer inspiration…

If anything, the storytelling section of my brain-goo is even better served by the game. Whether I had chosen to follow the characters and events in Tyranny by the book or no, they would still need to be brought to life. Settings need set, moods need evoked; emotions conveyed, senses conjured. All with word, gesture, tone and mood.

I’ve trod tentatively in the oral storytelling steps of others before, having done a year-long course in the craft and stood up in front of a crowd a couple of times in traditional storytelling pubs. Time and other pressures put paid to that, but never managed to silence that part of my brain that kept pleading – however quietly – to be let out again.

Now it doesn’t need to beg. Whilst I’m far from being a Critical Role-style voice actor or a vocal performer of any kind, I am absolutely loving bringing Faerun and the folk within it to life. Sure, all my halflings sound the same and – yes – all my dwarves are Glaswegian, but what the heck: it’s an absolute blast. Equally enjoyable is using those faintly-remembered storytelling techniques to sketch in some sensory detail into the lands, structures and objects of the Sword Coast. And, of course, this isn’t been done purely for my own entertainment – and hopefully this enjoyment is coming across in the game sessions themselves.

So thank you, D&D — and to all the writers, artists, editors, playtesters and worldbuilders who have made it such an immensely satisfying place to let my creative brain-parts play. And a massive thanks of course to the players, for keeping the narrative ever-exciting and unpredictable.

You are all making an old apprentice bard very happy indeed.